An Update from Linda
The Kerr Grabowski workshop in Fall River Mass. was wonderful - I had a great time and learned a lot. The facility is an old
manufacturing building but was roomy, very bright due to large windows and air conditioned! 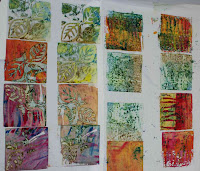 Kerr is an excellent teacher and I would recommend her classes to anyone interested in deconstructed screen printing. 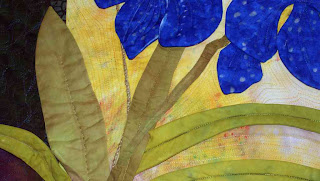 After returning, I have been working on
"Blue Orchid" and am almost finished except for adding the aerial roots and labellum, without having it look too "Georgia O'Keefesh".
-Linda-
Posted by PJ Howard at 9:29 PM No comments:

An update from Debbie

Last Friday was definitely "Davidson Day." Nancy was in Davidson, NC being feted at a reception for her show at the Wooden Stone Gallery. And I was on North Davidson Street in Charlotte (also known as "NoDa") enjoying the mid-August gallery crawl that included my solo show at Beet Contemporary Craft and Functional Art Gallery. 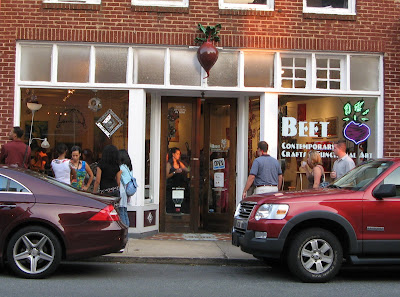 Beet is a lovely space featuring an eclectic and a wonderfully beautiful mix of jewelry, glass, ceramics, wood, metal, and fiber arts.

And owner Nancy Neely is incredibly generous in inviting artists to mount month-long shows in the middle room of the gallery.

There was a good crowd on Friday night -- with folks wandering in and out of the galleries, munching on snacks and relaxing with a little wine.

The show's title, "Stitched: An Artquilt Journey," probably says it all. It's a sampling of quilts (and styles) that I've been doing over the past few years.

There's a wall (and then some) of abstracts:

(I've got some new abstracts as part of the show...I'll plan to report on them in another post....)

The hangouts are gathering places that cross color and class lines -- where bankers mix with bikers and lawyers share a beer with construction workers.

The images that have been transferred to fabric and made up into quilts (either free hanging, or framed)

And finally, there's a wall of photomosaic quilts (I'm "posing" in this one -- hot, sweaty and a bit pooped after helping to hang the show): 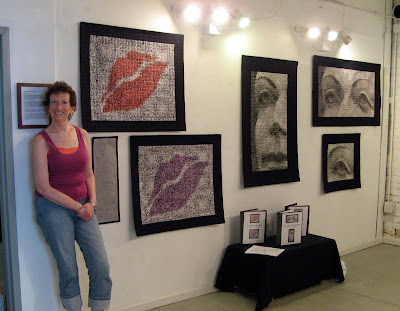 The newest photomosaics are the first two in the picture -- They're titled "Out of the Mouths of Babes." (one is "Tomato Lips" and the other is "Grape Lips" --- guess which one is which....)

I've been thinking about these quilts for a while (and probably working on them even longer).

As you can see... from a distance, the image is of a pair of lips 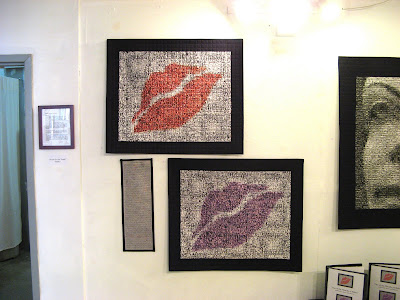 A close-up view shows that the quilt is actually made up of small 1/2 x 1/2" photos of women...from Jane Austen to Miss Piggy to Benazir Bhutto to Babe Zacharias (one of the first female golf pros).

(This photo shows a section of the unquilted surface) 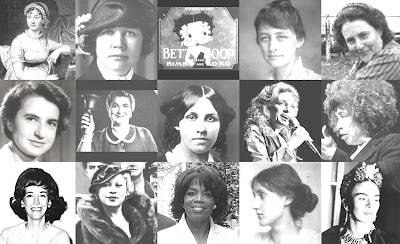 On the back of the quilt is a photo key/index that shows each woman, some information about her, and a quote attributed to her.

Because I got to be "Queen of the World" (or at least "Queen Quiltmaker") while making the quilt, I picked the women and quotes that appealed to me -- because they were poignant, thought-provoking, inspiring, or just plain funny. It's been an interesting journey.

I'll end this entry with a small sampling of some of my favorites:

"A woman is like a tea bag; you never know how strong she is until she gets into hot water."
Eleanor Roosevelt - Humanitarian, American 1st Lady

"I would be the most content if my children grew up to the be kind of people who think decorating consists mostly of building enough bookshelves."
Anna Quindlen - Writer, Journalist

"It's not enough just to swing at the ball. You've got to loosen your girdle and let 'er fly."
Babe Zacharias - Athlete (golf)