Come see me this weekend at Matthews Alive

Matthews Alive, one of the biggest festivals in North Carolina, and one that boasts the biggest Labor Day Parade in the Southeast, is this weekend. I’m the featured artist at the Quilt Show, which contains work by lots of local quilters. The show encompasses beginners and experts, and many types of quilting; I got a preview, and it is just terrific!

Carnival midway, rides, corn dogs and cotton candy, music, arts and crafts – it’s all here. There’s music, too, everything from rock and pop, alternative, beach music, and a Beatles tribute band. The festivities start tomorrow and run through Monday.

One of the coolest things about the festival is reflected in its motto: “Good times funding good works.” The celebration is dedicated to the support of non-profit organizations through music, arts and community involvement.  Nearly 1,000 volunteers – including Megan Shein (who organizes the quilt show) and her husband — put in more than 2,000 hours of volunteer time to run the three-day festival.  One hundred percent of profits go to local non-profits; to date, that is more than $750,000! Everything from marching bands, scout troops, adult day care centers, and charitable groups all benefit.


The online map shows you where I'll be; in the Community Center, just off the main drag. It is a beautifully restored school building. I’ve been warned to expect a lot of traffic. Last year, the quilt show got more than 2,500 visitors! I wonder how much of it has to do with the fact that we are indoors, and the air conditioning in the Community Center is excellent! I’ll have my books, DVDs and patterns for sale, and will be working on new work and demonstrating the whole time I’m there. Come and see! 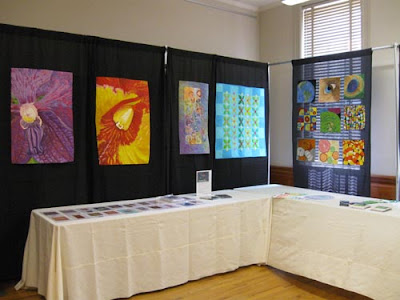 They even gave me a VIP all-access pass, which I am wearing around the house this evening so that the kids don’t mess with me. Hey, I’m a VIP! 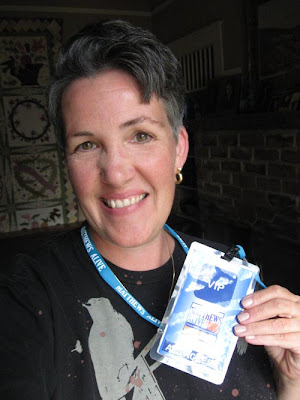 Come and join me tomorrow. The parade starts at 10!
Posted by Susan Brubaker Knapp at 9:54 PM 3 comments:


A while ago (yikes...where did the summer go?) I posted about the piece I was making for the SAQA auction.  The auction is right around the corner...it starts on September 12th.

Like so many things I start, I thought I was all set.

I'd fuse a square from my UFO pile onto a piece of dupioni silk. The silk would bring some texture and shine to the piece. A little free motion quilting would finish it off and the piece would be done!

The project was practically finished before I began.


But the best laid plans....
Once I put the two pieces together, I wasn't satisfied.  Everything looked too static, too blah.

What did it need?  Maybe a little shine, a little *bling.*

So I went diving into my small stash of  lame (shades of frowning French professors -- this needs an accent on the "e" -- but my blogging skills aren't that refined).

I cut some strips and extended them beyond the square to bring extra movement and that extra bling. 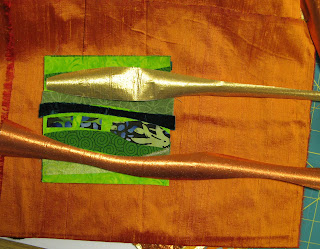 I thought that helped.

But now the light green top and bottom edges of the square weren't "weighty" enough to anchor the square on its silk background.


So back to the design board to add some strips of dark blue velvet... 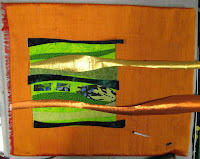 
I also wondered if it might be fun to extend the patterned fabric into the background. 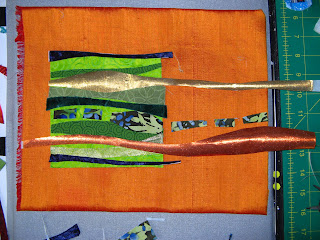 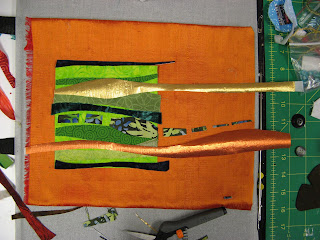 No go on this idea...the extra pattern distracted from the main square and the flow of the lame.


So maybe I needed a little more lame...something that would help integrate those two large strips of lame with the rest of the design.   So once more, back to the lame stash for two more pieces of the shiny stuff. 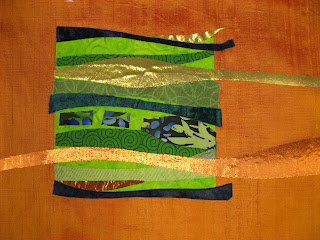 This did the trick for me (plus the deadline was rapidly approaching).

A little hand-guided machine stitching, some blue metallic thread around the large pieces of lame, and here's the finished piece.
In the midst of the blistering summer heat, the title seemed to be a natural:  Heat Waves (you can find it on page 3b of SAQA auction site). 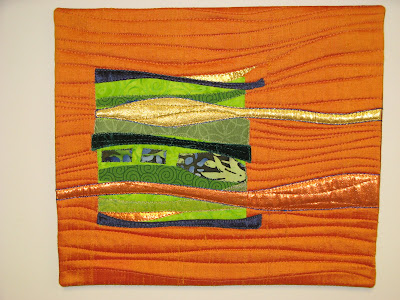 A side note:   I thought it might be apropos to include the word "evolution" in the title of this post.  Here's why:  the project that was "practically finished before I began" - a 10.5 X 12 inch piece - took on a life of its own.  Between cogitating and experimenting, 2 1/2 months passed between start and finish (and this doesn't count the time I spent on the little UFO square!).  All I can say is that I'm glad quilting efforts aren't measured in geologic time.
Looking forward to the cool breezes of Fall